Despite Ellie's blindness, we decided to bring her with us to all of our Christmas festivities and play it by ear. Fortunately, she did very well at both my dad's house and Chris' parent's house! Who knew blind dogs could detect walls and furniture without crashing into them first?!

Here are the photos I got throughout the day:

And on December 26th, Ellie slept ALL day long!

Email ThisBlogThis!Share to TwitterShare to FacebookShare to Pinterest
Tags: christmas

It's been a while since we've blogged! My how time flies when you're busy-- this holiday season has been crazy for us!

I moved desks at work so Ellie no longer sits by her best friend Sadie. Unfortunately, she is very antsy and bored at work now that she has no buddy so I have to leave her home during the day instead. However, Sadie's mom said that we should still have play dates so that's what we did this weekend!

Sadie's mom came and picked Ellie up and took her over to their house where they have a fenced back yard. Not only did Ellie get to spend time with her best bud, but she got to explore the outdoors without a leash! It definitely made me very happy!

Ever since going blind, Ellie is such a silly-pants with the places and positions in which she lies. Fortunately, I have caught lots on camera!

I was wrapping Chris' b-day presents so I set everything down and then Ellie went and laid next to the stuff like this:
And later that same day: 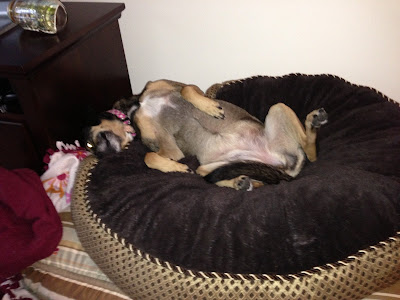 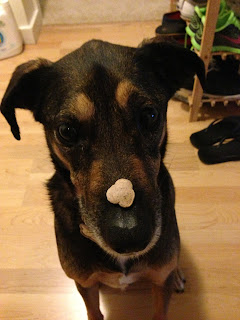 Ellie has been on a diet lately what with her latest charades and also putting on some weight due to her eye condition. So when I received the offer to sample dog treats from Chewy.com, I was a bit hesitant. I let them know that she is on a diet, and was delightfully surprised when the treats arrived: Fromm Cranberry Liver Recipe 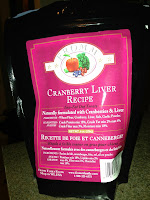 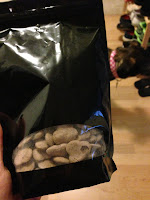 I've been into healthier eating lately, and that means cutting out processed foods and ingredients we can't pronounce. I feel very good about treating Ellie with these little biscuits because the only ingredients listed on the label are wheat flour, cranberries, chicken liver, salt, and garlic powder! Nothing crazy and unpronounceable.

Needless to say, she chomped them right down, but I must also mention that Chris tried them too. I would never do it because dog snacks aren't my cup of tea, but he said they were not bad! 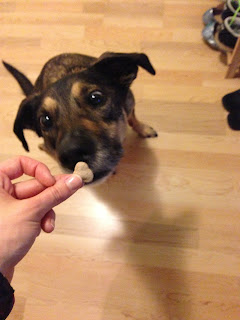 Thanks, Chewy.com for the Fromm dog treats!

What's on the agenda: 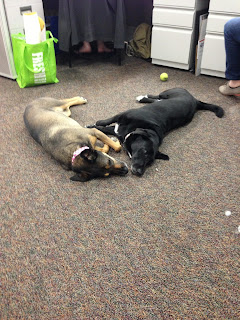 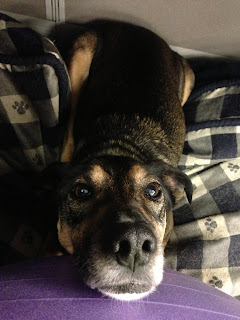 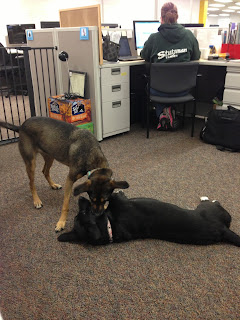 Yesterday, Ellie stayed home from work with Chris because he doesn't work Mondays. He ran a couple of errands so wasn't with her the whole day which is normal.

We just got a new fan in the bedroom, so I took the old box fan and set it up against the wall for now, like so:


But when I came home from work yesterday, I noticed it was all the way over by the bed, like this: 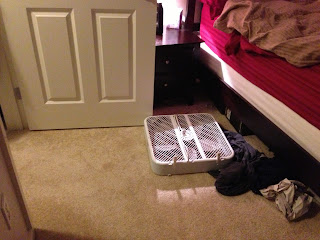 We thought nothing of it and put it back up against the wall.

But a few hours later, Chris came up to me with some tiny pieces of broken metal he found on the floor and asked if I knew what they were. I said no and he threw them away.

Later that night, I was petting Ellie and I noticed her dog tags were missing. Oh no! Then it hit me... I put all the clues together and figured her tags must have gotten caught in the fan (and she probably had quite a freak out-- that thing is as big as her!) and dragged it across the room until the metal ring finally broke and set her free.

We later found the tags inside the fan and had to shake them loose! 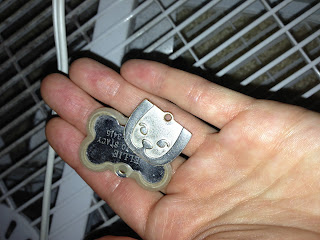 Never a dull moment with a blind dog!!