This past weekend, Ellie and I enjoyed a beautiful sunny Sunday at Seward Park in Seattle for the Furry 5K walk/run to benefit the Seattle Animal Shelter.

We were both overwhelmed with the number of dogs and people who showed up - hundreds! And the dogs were all shapes and sizes. It's always so much fun to see such doggy diversity.
In going through my pictures, I also realized that we went hiking on Saturday too! I went with a big group of girls and there were very few people on the trail which meant Ellie got to be off leash. She LOVED it. She kept sprinting ahead and then running back to make sure we were keeping up.
Lots of physical outdoor activities for us this weekend!

Graduating from the crate

I have been trying to crate-train Ellie for a number of months now, ever since I realized that she was slightly destructive when left to her own devices. If allowed, she would get onto the furniture (where she's not allowed) or scratch at any closed doors, including the front door. 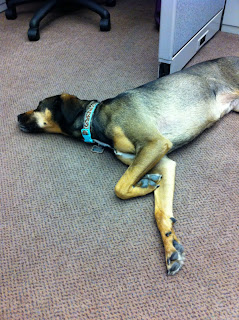 Well, I finally realized that it was not the fact that she was left alone, but the beeping from the cable box that caused Ellie so much anxiety which lead to her destructive behaviors.

A few months ago, I traded out the cable box and there have been no beeps and no anxious episodes since. And last week, I decided to give her another chance at being left alone without being confined to the crate.

I am pleased to report that she is doing famously! When I return home from being away, she sleepily trots to the door to greet me. In other words, she isn't waiting by the door panting from anxiety of being alone or scared. She is well-rested, and even ate any treats that I left (something she won't do when anxious)!

While I am still crating her at night so that she stays used to the concept, it is such a relief to know that I can leave her home alone and she can still stretch her legs and get water when she needs it!